Adding product to your cart

This is an awesome blend of adaptogens that I take every day regardless of altitude.

I take this at any altitude as it increases my mental awareness and physical capacity at all times, especially when I am under stress.

30 days of cognitive support in every bottle.*

...is an adaptogenic supplement comprised of a complex of roots, mushrooms and herbs that support blood and oxygen flow to ensure your stamina can endurance at altitude.

These adaptogens have health benefits such as improved brain function, energy, balanced hormones and improve physical, emotional and psychological responses to stress.

Designed to help you be your best at any altitude, whether in the mountains, the range, the boardroom or the studio

While mainstream Western medicine doesn’t officially acknowledge adaptogens since research has been limited, there are many practitioners in complementary and alternative medicine who assert that adaptogens effectively improve health without side effects.

Ginkgo Biloba is one of the oldest living tree species. The most helpful components of ginkgo are believed to be flavonoids, which have powerful antioxidant qualities, and terpenoids, which help improve circulation by dilating blood vessels and reducing the "stickiness" of platelets.

Reishi supports health and immunity. This mushroom has been used in Chinese medicine for over 2000 years and is commonly called the “king of mushrooms” for its adaptogenic qualities. It has many polysaccharides and beta-glucans that are known to help support healthy immune function and promote a sense of calmness.

Rhodiola contains more than 40 active compounds, including two that are particularly potent: rosavin and salidroside. While both have beneficial properties, studies have shown that rosavin specifically has anti-anxiety and antidepressant effects. Rhodiola is used to reduce fatigue, anxiety and stress.

Chaga is a mushroom that grows on birch trees. Chaga contains a variety of phytonutrients and polyphenols, vitamins and minerals which offer a great source of antioxidant nutrients for overall well-being.

Lion's Mane is another adaptogenic mushroom that helps with mental performance particularly memory and focus.

Tell me more! We've written a brief explanation of each ingredient on our blog, which you can view HERE 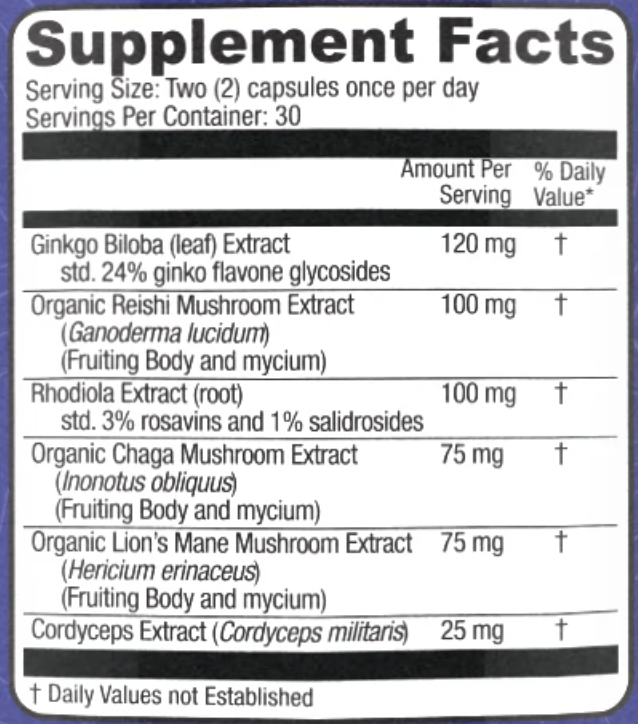